A new cadet checked in today wearing his casual civies with flip flops.  Since we are starting initial training with a break-in period of boots and military shoes—we stay in running shoes for a few days. The running shoes are on the list to bring, but the new cadet somehow forgot or they got left in the car.  So, there he is standing in the road being told to figure it out by the Training Cadre.  I noticed this happening, walked over, took off my running shoes and gave them to him (perfect fit).  He ran off with the unit and I walked back to my office barefooted.

I flashed back to 30 years ago in Desert Storm when I saw a Marine Colonel take off his boots and give them to a Private whose boots had holes in the soles and his feet were rubbing on the hot sand. The Private put the boots on (perfect fit) and ran off. The Colonel walked off the other direction barefooted (I guess he had another pair somewhere?).

Leader’s lead and they set the example. We follow positive examples of leaders and pass it on.

"Jesus called them together and said, “You know that those who are regarded as rulers of the Gentiles lord it over them, and their high officials exercise authority over them. Not so with you. Instead, whoever wants to become great among you must be your servant, and whoever wants to be first must be slave of all. For even the Son of Man did not come to be served, but to serve, and to give his life as a ransom for many.”
—Mark 10:42-45

On the way my home for the day…barefooted and happy. 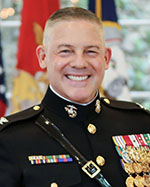